There’s nothing quite like the adrenaline kick of a closely contested horse race. There are two main forms of horse racing in Ireland and Great Britain.

Flat racing – which is run over distances between 5 furlongs and 2 miles 5 furlongs 159 yards on courses without obstacles.

National Hunt racing – which is run over distances between 2 miles and 4 1⁄2 miles, where horses usually jump either hurdles or fences (races known as steeplechases).

The racing of horses has a long history in Ireland, it is one of Ireland’s most popular sports. Ireland is one of the strongest producers and trainers of Thoroughbred horses in the world. 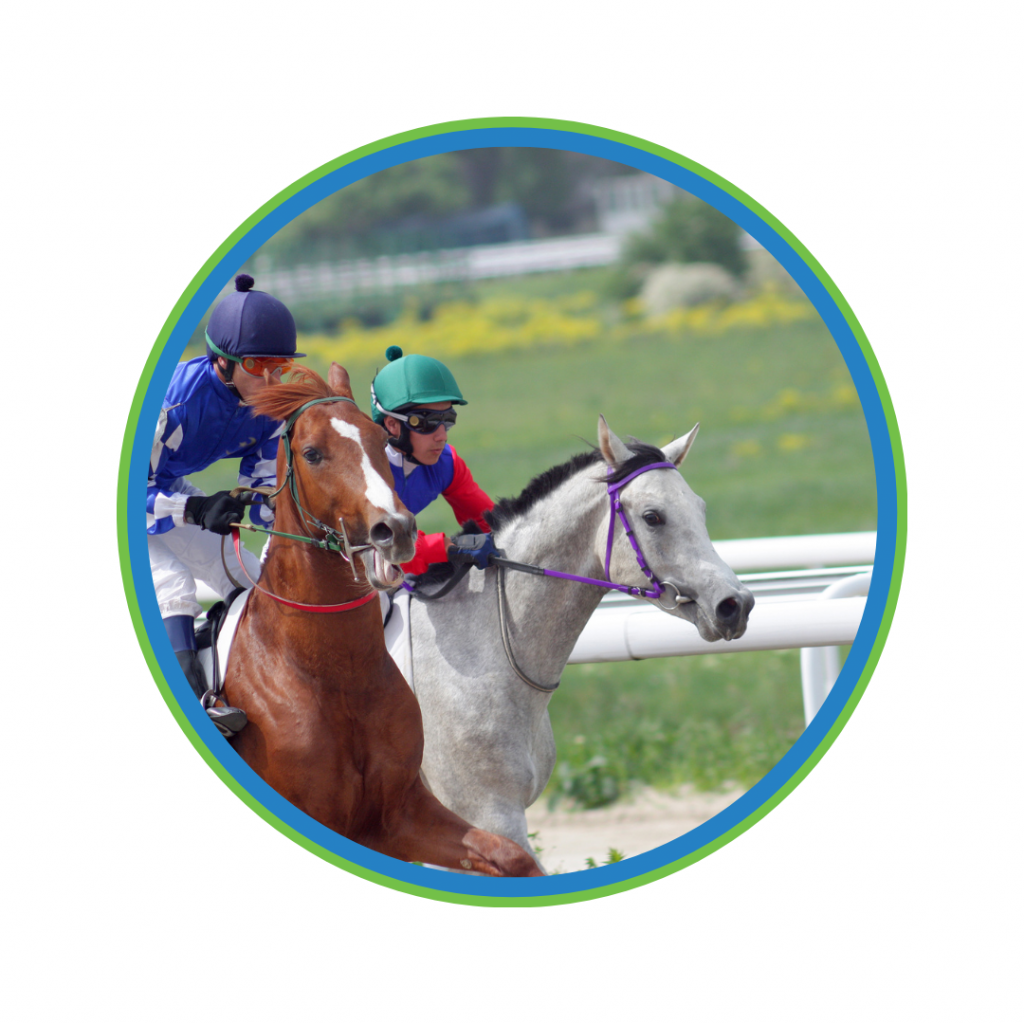 Which Races Can I Bet On?

There is a wide choice available at BetXS.

We host a great selection of all of the top race meetings on our betting terminals.

Whether you’re a beginner just starting out or an experienced bettor looking to freshen your knowledge, our easy-to-read guide has got you covered!

Accumulator: An accumulative bet that involves more than one horse, usually requiring all your horses to win in order to be successful.

Allowance: To compensate for their inexperience, novice riders may be allowed a weight concession for their horse.

All-Weather: Horse racing slang for an artificial track that can be raced on throughout the year, including in adverse weather conditions.

Ante-Post: This is when you place a bet on a race ahead of the race day.

Apprentice: This is a horse racing term applied to young jockeys who work for/with a trainer while they gain valuable riding experience.

Banker: A term used to describe a favoured horse in a race. If they are a ‘banker’, they are the horse that’s most likely to win, and their odds will reflect that.

Bar: Where you can find the lowest odds for horses that have not been published in betting forecasts.

Birthday: All thoroughbreds in the Northern Hemisphere celebrate their birthday on New Year’s Day, regardless of when they were actually born.

Board Prices: A horse racing betting term for the prices displayed by official bookmakers, from which prices are then decided.

Bottle: Horse racing slang for a horse with 2/1 odds.

Burlington Bertie: Horse racing jargon for a horse with odds of 100/30.

Bumper: A flat course race that inexperienced jump horses need to complete before they go hurdling or chasing.

Carpet: Horse racing slang for a horse with 3/1 odds.

Claimer: Refers to a race in which a horse has been purposefully handicapped by its owner.

Clerk of the Course: The person that’s in charge of running the entire race day.

Colours: The shirts worn by the trainers, jockeys, and owners. Each team has their own unique colours.

Conditional Jockey: A horse racing term for someone at the same level as an apprentice, but is allowed to jump.

Co-Favourite: The title given to a horse or horses that are equally likely to win a race and have the lowest odds.

Connections: This generally refers to the owner(s) and trainer(s) of the horse in question.

Course Specialist: A horse that has either won or set a good time at a specific race before.

Cockle: Horse racing jargon for a horse with odds of 10/1.

Dam: The mother of a horse.

Distance: Usually refers to the length of a race or the amount of ground covered by a horse.

Draw: In flat racing, this refers to the horses’ starting position in the stalls.

Drift: When a horse is ‘on the drift,’ it’s price increases due to a lack of support.

Even Money: A horse racing betting term for a stake that brings equal money back.

Filly: A young female horse of up to four years old.

Gelding: A male horse that has been castrated in order to be easier to train.

Going: A term that describes the condition of the race course, ranging from heavy to firm.

Handful: Horse racing slang for a horse with odds of 5/1.

Handicap: Where horses are allowed to carry different weights from each other, leading to an even race.

Joint Favourite: Two horses that the bookmakers cannot choose between.

Jolly: The favourite horse in any given race.

Judge: The person who decides the finishing order of the race.

Maiden: A horse that hasn’t won a race.

NAP: Usually the best bet from a tipster on any given day.

Nursery: The name given to a handicap for horses under the age of two.

Objection: When one jockey makes a formal complaint about another rider.

Odds On: A horse racing betting term for when the winnings of a bet are less than the initial stake put in.

Off the Bit / On the Bit: A term used to a describe whether the horse still has the bridle in its mouth when racing.

Open Ditch: A jump with a ditch in front of it, facing the jockey.

Photo Finish: A photo taken at the end of the race that is used to determine the winner if two horses are too close together.

Racecard: The programme of the day’s races.

Rule 4: This is only enacted if a horse is withdrawn without sufficient time to change the odds of the rest of the race. Essentially, all other odds are reduced via a specific formula to compensate for the horse leaving.

Schooled: A horse that has been trained for jumping.

Selling Race: At the end of this race, the winner is sold at an auction.

Sire: The father of a horse.

Spread a Plate: When a horse loses its shoe.

Starting Price: The estimated odds when a race is about to begin.

Stewards: A group of officials who ensure that rules are adhered to. A Steward’s Enquiry is when the stewards look into a particular aspect of a race.

Tic-Tac: Hand signals used by bookmakers to converse with each other.

Under Order: Refers to the start of the race, while ‘they’re off’ refers to the horses leaving the stalls.

Walkover: A race with only one jockey and one horse.

Yearling: A horse under the age of one, with its birthday on the 1st January.